A Tyranny of Hooch

A Tyranny of Hooch

The recent hooch tragedy that struck Assam, in which died about 170 people, has put the State on near the top of all deadliest hooch tragedies in India. 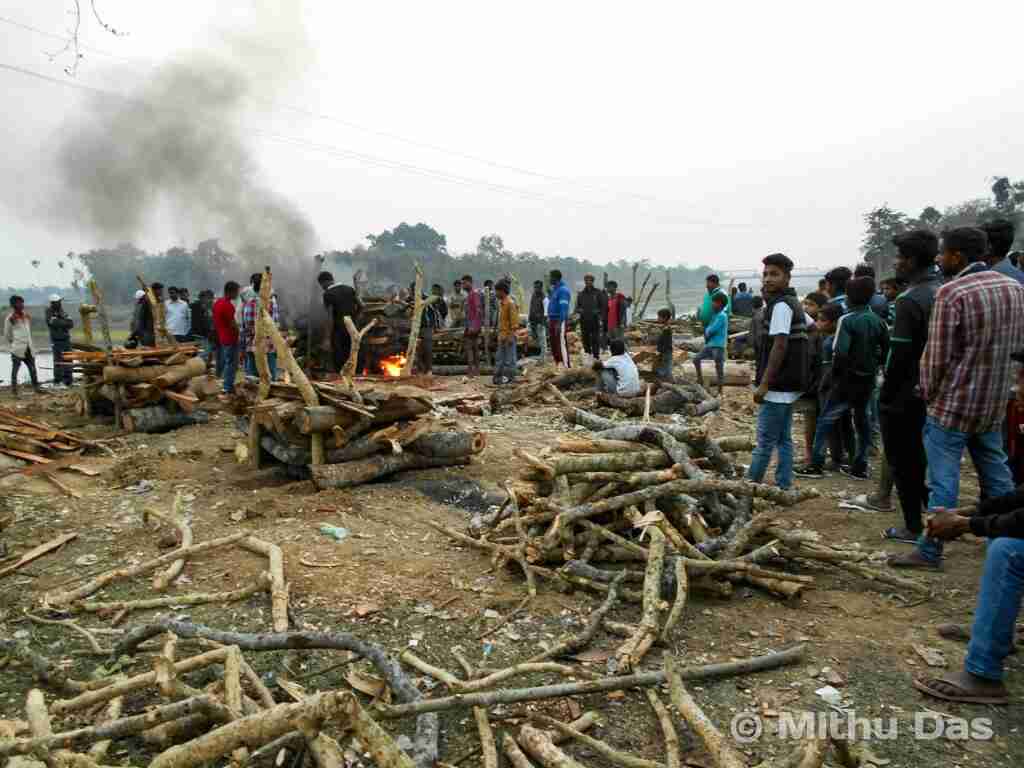 A mass funeral of the victims of hooch was taken place in Halmira field on the bank of the Dhansiri river on 23rd February, 2019.


It was Thursday, February 21, 2019. The dusk had just fell over the lines of labourer houses at Halmira Tea Estate, Golaghat. The labourers, after finishing their daily work at the tea garden, came home tired and, some of them, like any other day, entered next door or nearby shops and began drinking cholia, a type of hooch which is brewed illegally at home.

About an hour later, a man named Jugnu, who lived in the same area, was collecting drinking water from a tube well on the road. Suddenly, he saw some men were pulling a two-wheel cart on which lying two seriously-ill patients, both were unconscious and covered with blankets, heading towards the garden hospital.

“I asked them who they were carrying on the cart and what had happened to them,” Jugnu told me. “One of the men replied that it was Drupadi Orang and her son, their neighbours, who were found lying unconscious in their house.”

According to various reports, Drupadi and her son sold cholai in their house. However, they did not make it by themselves. They bought it from outside. That fateful day, the mother and son, after buying a jerrycan of cholail—which was supposed to be poisonous—served it to their customers. They had also drank some from the same jerrycan few hours earlier. After an hour or so, when the customers had left, the mother and son got horribly sick and they had been taken to the garden hospital. That night, around 9:00 pm, both of them died. Following their death, more reports started to come about people collapsing in convulsions. Within a few hours three more women had died.

The next morning, the entire neighborhood turned out to be a horror movie scene. Dozens and dozens of people started complaining about intense pain in the stomach, violent headache and losing eyesight. Some were vomiting uncontrollably, screaming with unbearable pain while the others were writhing in their death agonies. Within an hour or so the small tea garden hospital got full of terminally-ill patients. Unfortunately, the garden hospital was not able to give them emergency treatment. So they were immediately sent to Golaghat Civil Hospital where many of them died. Yet those who were still counting their last breath were either transferred to Jorhat Medical College or private hospitals.

“Few have returned alive,” mourned Biren, a neighbour of Drupadi Orang’s. “We’ve seen the ambulances carried them to hospital. The next day, they brought back their bodies.”

Ironically, Halmira was not the only place where the tragedy had struck; more than a dozen of places in Golaghat and Jorhat district was affected. In Friday alone, it was reported, more than eighty people had died. Following the next two days, the death toll had risen to 170 among which many were women.

In Halmira, a mass funeral of the victims of hooch was taken place in the open field on the bank of the Dhansiri river. Several pyres of freshly cut trees had been built to burn the bodies. Attending the funeral gathering, in Saturday evening, I could see black smoke rose into the sky as relatives set fire to the funeral pyres. Near the burning pyres were sitting women and children who were crying involuntarily. People attending the funeral—the public, reporters and government officials—were silently looking at the burning pyres.

Bhumiz said that he lost three of his close friends. Similarly, he told me, Sunil lost his mother, Budhuwa his father, Matu her husband, Badal his wife, Kanu his sister, Tari her brother, and four little children—Rupali, Badal, Kundan and Chandan—lost their parents.

Drinking homemade alcohol is not uncommon among tea garden workers in Assam. In fact, like many other indigenous people of Assam, tea garden workers—who had been brought to Assam by British colonial tea planters in the mid nineteenth century—also have their traditional alcoholic beverages, such as Haria or Handia, which is brewed at home.

“We like to drink Haria,” said Sunil Bhumiz whom I met at Halmira field where the memorial service was held for people who died in the hooch tragedy. (Sunil, 37, lost his mother.) “In almost every special occasion we make Haria at home and often it is served to our guests. However, some of our people also prefer to drink cholai which is far more stronger than Haria. We have been drinking it from time immemorial. But never has happened such an appalling tragedy before.” According to various reports, the hooch was adulterated with toxic methanol which caused the deaths.

“Had this tragedy occurred just before Durga Puja festival," added Sunil. "Many hundreds of people would have died."

It is often believed that drinking homemade cholai—which is brewed from rice and jaggery, mixing with different kinds of herbs—could help you keep your blood pressure under control. However, no research has yet been conducted to find the truth. On the other hand, the cholai which is made today by bootleggers is said to be counterfeit. It is made using rice and fermented molasses. However, after the distillate cholai is collected, it is adulterated with methanol and other harmful chemicals, such as pesticides and batteries, so that it’s potency can be increased.

“Recently the liquor has started to come in plastic pouches which are incredibly strong and cheap,” said Tanti, a friend of Sunil’s. “We hear that the liquor is being transported by oil tankers.”

Tanti’s remarks suddenly reminded me about the recent hooch tragedy that struck Uttar Pradesh—it had happened just ten days before the Assam hooch tragedy—and killed more than 100 people. The poisonous alcohol was reported to be supplied with plastic pouches and smelled like diesel fuel.

“Could it be that our people also died after drinking these pouches?” I asked Tanti.

“We don’t know,” he said, “but I hear that many hooch sellers have recently started to mix these pouches with homemade cholai.”

The day after the incident, Assam police and excise officials raided several houses and shops where illegal hooch was sold, detained many people in cutody. Both police and excise departments were heavily criticized for their failures to stop flourishing hooch in towns and villages. People demanded of both of the departments that they should stop taking bribes from hooch sellers. Similarly, they demanded of the Minister for Excise that he should resign and of the Chief Minister of Assam, Mr Sarbananda Sonowal, that he should impose a ban on the sale of molasses in the state. However, many people think that enforcing a ban on molasses won’t help solve the problem of alcohol, which the state has been confronting for a long time. They suggest the government must give first preference to make people aware of the dangers of alcohol and drugs. On the other hand, women are calling for a complete ban on liquor in Assam like it has been banned in Gujarat, Nagaland and Mizoram.

Here’s a list of seven of India’s deadliest hooch tragedies:

Bangalore, Karnataka, 1981
It was India’s worst hooch tragedy which claimed 308 lives. The cheap liquor people drank was said to be adulterated with methyl alcohol.

Karnataka and Tamil Nadu, 2008
About 180 people died after drinking illegally brewed liquor which had been supplied in plastic sachets.

Golaghat and Jorhat, Assam, 2019
About 170 people died of drinking adulterated cholai, a type of hooch which is illegally brewed at home.

West Bengal, 2011
About 156 people died after drinking spurious liquor which was adulterated with methanol. An investigation carried out by the Criminal Investigation Department (CID) revealed that the alleged kingpin was close to many politicians and police officers.

Uttar Pradesh and Uttarakhand, 2019
More than 100 people died after drinking illegally brewed homemade alcohol or desi daru which was adulterated with toxic methanol.