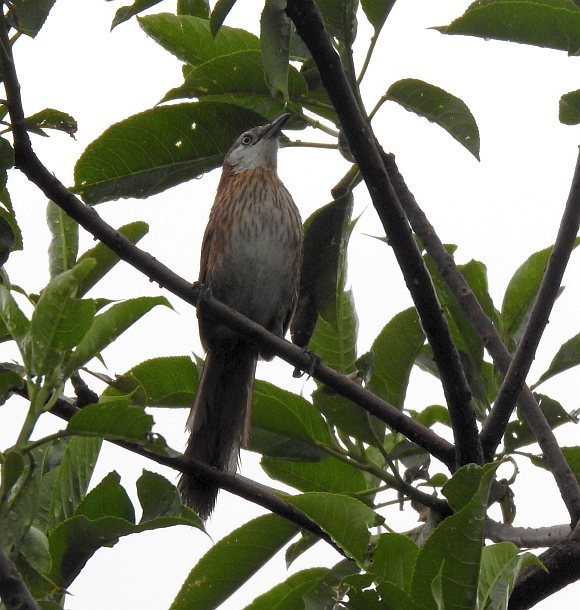 
Nepal is famous for its snow-peaked massive mountains, green high hills, beautiful lakes and rivers. It is famous for its rich biodiversity, too. Its avifauna has ranked 26th in the world. More than 822 species of birds are found in Nepal. About 38 of them are endangered. Spiny Babbler—local name Kaande Bhyakur—is the only endemic bird species found in Nepal.

[An endemic species (or restricted-range species) is a species of animals, birds or plants which is found in a certain area but nowhere else in the earth.]

Spiny Babbler (Acanthoptila nipalensis) was scientifically described by British naturalist Brian Hodgson in 1830. However, after Hodgson, no one had seen this bird in the wild for more than one hundred years. People thought it had gone extinct. Then, in 1940, it was rediscovered in West Nepal by S. Dillon Ripley.

Today, Spiny Babbler can be seen around Kathmandu valley, central west Nepal, northeastern part of the country and southwest Nepal. According to Birdlife International, this babbler may also be seen in Sudurpaschim Pradesh. Every year, many bird lovers and naturalists come to Nepal to see this rare bird in the wild.

Spiny Babbler is a brown-coloured bird that has a length of 28cm (11 inches). Its chin and throat are white, and underparts is well streaked. They are terribly shy birds. So it is very difficult to spot them in the wild. However, during the breeding season (April to June) we can see these birds in the open field.

Spiny Babbler is not an endangered species, says Birdlife International. However, it is thought that the habitats of this bird may be slowly dwindling. It is our duty to protect these birds and their habitats.

Mithu Das
I'm from Golaghat, Assam; presently, residing at Bisarniya, Rajasthan, teaching English at OASIS Star Academy Bisarniya. Last year I was in Dipayal-Silgadhi, Nepal, where I taught English to students from Class IV to VIII in Shree Bhagrati Academy. I often write in my Blogger blog ASSAMBIRDS which, like a cover of a book, you can't judge it by it's name. Previously, I wrote in Assamese language. Follow us on Twitter   Facebook   Google+   LinkedIn. Subscribe to our Feeds; or, contact us here. Visit our image gallery at Nat Geo Your Shot