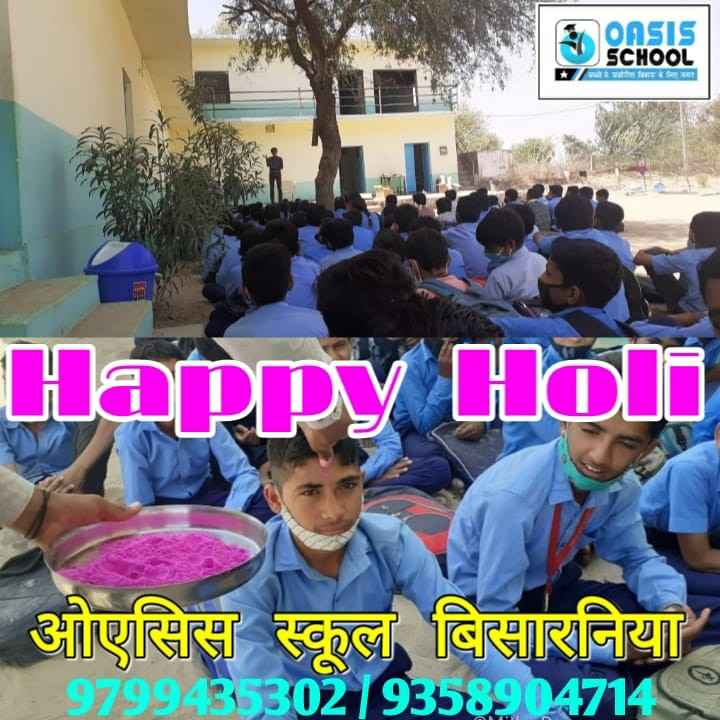 On the eve of Holi festival, OASIS teachers delivering speech to students on the origin of Holi and its significance to Indian culture.


I'm standing on a sandy hillock in the middle of the semidesert area at Bisarniya, Rajasthan. The land in front of me is covered by dry sand with scrub vegetation, khejri and rohida trees, which is spreading miles after miles. At first glance, to a stranger, the place could seem uninhabited. But it's not. The majority of people who live here are peasants. Castor oil plant and cumin are the main crops the land produces. The place is surrounded by small and big shops, schools and a great many temples.

Oasis—the first word came into my mind when I arrived here—it's an oasis. Yet, beside this calm oasis, there was another surprise was waiting for me. In the middle of this semidesert land there's situated my new school—OASIS Star Academy Bisarniya.

I joined OASIS as an English Teacher in March this year, and my first day in the school was unforgettable. As I entered into school boundary, students started greeting me with "Namaskar" and "Good Morning". Some rushed to me to touch my feet. I was highly delighted with their good behaviour. Actually, it is a custom in Rajasthan to greet teachers by touching teachers' feet.

That day—few minutes before the last period ended—some students wanted to know about me: where my hometown is, where I was teaching before joining OASIS, if I like Bisarniya, whether I had seen a desert before, whether I had seen a camel before, etc., etc. I liked their questions and gave them answers to all. Later, I found the students were brilliant. Every one of them. They were inquisitive about everything. They wanted to learn basic vocabulary, asked me about passive, and were impatient to get started a new English lesson.

Before joining OASIS, I was in Dipayal-Silgadhi, Nepal, teaching English and Social Science to students at Shree Bhagrati Academy. I had been teaching there for five months until I came into contact with Mr Jhunjha Ramji via Facebook. (The link was sent to me by my brother Mr Julu Das.) Jhunjha Ramji had been looking for an English Teacher for OASIS. When I heard about it, I sent him my Curriculum vitae. Needless to say, within a week, I got a phone call from him. The following week I moved to Rajasthan.

Mr. Jhunjha Ramji, a jovial bright young fellow, is deeply interested in teaching. He encourages us to teach students in simple yet effective way. Every student must be motivated and inspired to learn, he says. Every month, Teacher Training Workshops are hosted, which helps us to learn new things about teaching method. In these workshops every teacher is asked to express their views on subjects related to education, school and teaching. The day-long workshops end with tea and snacks.

Beside this calm oasis, a good school, well-mannered students, and helpful and friendly colleagues (Jasraji is great, Binodji too), there are many other things which I'm deeply impressed by. The first thing is: Corporal punishment is strictly banned in OASIS. No teacher can hit a student with a stick or with hand no matter what mistakes—big or small—they do.

The second thing: I observe, almost in every classroom students are accustomed to coexist with nature, especially with birds—pigeons and sparrows. In Rajasthan, vegetarianism is a mainstream dietary of its people. Nobody kills animals or birds here. This is the reason why birds—especially the two species mentioned above—are not afraid of people. They build their nests wherever they like: into the closed space built for ventilation over the walls, cell towers or tree trunks. In our school, every classroom harbors at least two pairs of pigeons. Sparrows build their nests by the windows. Sometimes, when I'm taking classes, I notice one or two sparrows fearlessly enter into the classroom, look for something into the ground, and then quickly fly off the room. Sometimes they come so near to me that I want to pet them! For a bird enthusiast like me, I admit, I like the environment—teaching the children English accompanying by birds.

Outside the school, many other species of birds can be seen roaming all around the place. Among them peacock is the most common. You don't need an alarm clock to get up early in the morning, the male peacock will do it for you, with his short gasping shrieks "kaann" which he repeats 6 to 8 times.

Green parrots are also common here. They nest in natural cavities in tree trunks. These trees can be seen near people's houses or even marketplace. There is a big neem tree (Indian lilac) near my room, and in the lower branch—just seven feet above the ground—there is a hole in it where a pair of green parrots were raising their chicks. I could see the chicks often peeping outside from the hole. One day I carefully neared the cavity and was able to take photograph of one of the chicks.

One of the most common animals roaming freely in the streets of Bisarniya are the bulls. Remember, in India, how much people love cows! Bulls are worshiped and fed by everyone here. But these bulls are not like the ones that are found in our places (Northeast India). The bulls found here are two times bigger than ours. Their horns are very long and end in sharp black points. I've read in Wikipedia that the cattle found in Rajasthan and Gujarat is an Indian breed of zebuine cattle. These cattle are called Kankrej.

My brother Mr Julu Das—who also teach English at OASIS—like to feed the Kankrej. Actually, one or two Kankrej visit our compound every day. My brother feeds them on bananas, roti and vegetable scraps. Sometimes he feeds a Hanuman langur on biscuits, too. This langur often enters into our compound and sits quietly on the boundary wall. It doesn't leave the compound until we give it some biscuits to eat.

At last, I want to talk about the food people eat here. Most people eat roti or Indian flat bread which is made with wheat or millet flour. Rice is chosen as main meal by fewer people. Roti is eaten with tarkari (a dish made with vegetables), cow ghee and curds. Among the sweet food, Halua is everyone's first choice. Once ( No, two times) we were invited to Mr Jhunjha Ramji's house to take dinner. On the both occasions we were served Halua along with other foods. The Halua—which was made with semolina, milk, cashews, sugar and cow ghee—was the sweetest pudding I've ever eaten. We'd also invited to one of our colleague's wedding ceremony where we enjoyed eating Bundiya made with chickpea flour, ghee and sugar.

I'm standing on the hillock, watching the sun slowly rising in the east. It's 7 A.M. and students are heading towards school. Peasants have already started working in the fields. Shopes are being opened and the first bus to Barmer has just been arrived. Four Kankrej are standing near the road junction, waiting to be feed by someone. A group of peacocks are grazing in the playground, with the male happily dancing around them. I check the time and slowly started walking toward the school.