The 1950 Assam-Tibet Earthquake: An Overview 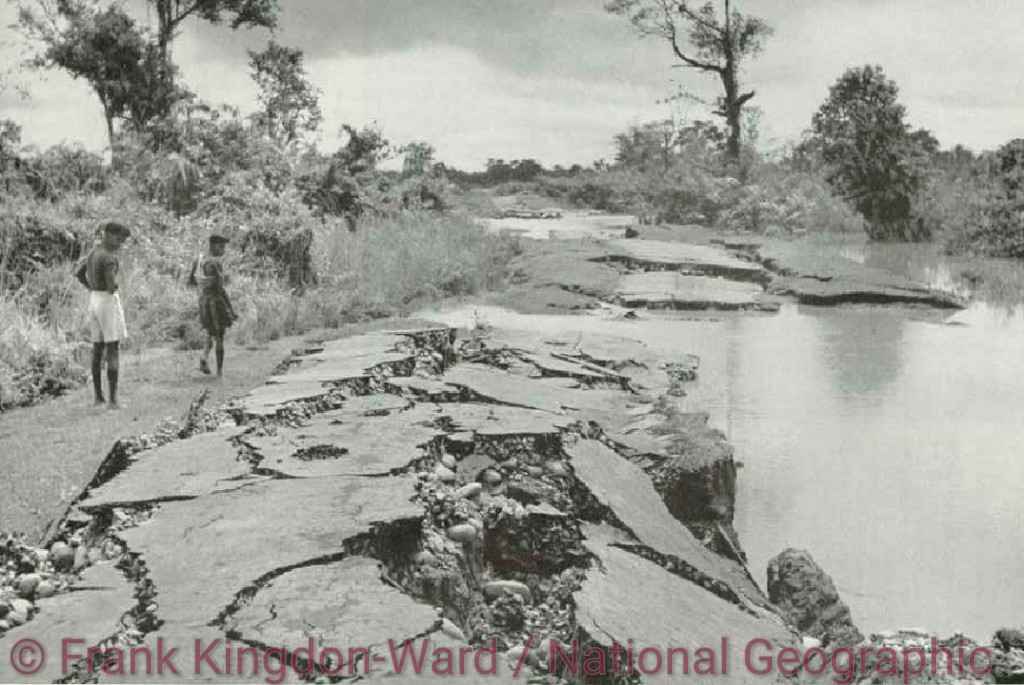 "Assam Pavement Sags: Water Gushed Up Through the Earth: Shattered slabs mark the course this road once took across the plains some 200 miles from the earthquake's epicenter at the Assam-Tibet border. It run through the Assam valley from Gauhati to the Luhit River across from Sadiya." (This image is a screenshot of the original photo published on National Geographic, March 1952. Photographer: Frank Kingdon-Ward. The caption is as it is appeared on the magazine.)

The Assam-Tibet earthquake, or 1950 Assam earthquake, is listed as the 9th largest earthquake in the world by U. S. Geological Survey. It struck the Assam-Tibet border on 15th August 1950 at 14:09:34 UTC (7:39 P.M. IST). The epicenter was located at Rima, Tibet. It was such a great earthquake that—registered 8.6 on Gutenberg-Richter Scale—it cracked grounds at many places along the Brahmaputra river and caused large landslides around Arunachal-Tibet Himalayan region. Hundreds of people died and thousands of houses were destroyed. "The quake was felt as far away as Calcutta. Seiches were observed in many lakes and fjords of Norway and in at least 3 reservoirs in England."

Mr Frank Kingdon-Ward (1885-1958), an English botanist and explorer, was at Rima when the earthquake struck. He described the whole incident in his article Caught in the Assam-Tibet Earthquake for National Geographic, March 1952: Darkness had fallen over the upper Luhit Valley in rugged far-eastern Tibet. Our simple evening meal was finished; my wife was already in bed.

Nearby our two servants were sleeping peacefully in their tent. I was seated near the entrance to ours writing in my diary by the light of a hurricane lamp. I glanced at my watch; it was 8 o'clock.

Suddenly a most extrodinary rumbling noise broke out, and the earth began to shudder violently. Shattering the dead silence of the night in that remote mountain retreat, the ominous rumble swelled to a deafening roar. It was though the keystone had fallen out of the universe and the arch of the sky was collapsing.

My wife leaped out of bed shouting "Earthquake!" I seized the lantern, and together rushed outside, only to be thrown immediately to the ground. The lantern went out.

A dozen yards away our boys were crawling out of their tent. We yelled to them to join us, and, although they had not heard our shouts, a minute later they crawled across to where we lay.

All four of us held hands and lay flat, waiting for the end.

Assam valley was largely hit by this earthquake. Grounds were cracked at many places and liquefaction occurred; fissures were opened in the earth and water spouted through them; houses, roads and bridges were collapsed and railway tracks were twisted. In Sadiya, wrote Mr Kingdon-Ward, Huge cracks opened in farmers' fields. Entire blocks of land sank several feet. Strips of pasture half a mile in length peeled away. The intensity of the earthquake was recorded (see Shakemap) "X at Sadiya, Passighat, Dum Duma, Dibrugarh, North Lakhimpur, and Sibsagar; IX at Digboi and Golaghat; VIII at Tezpur, Gauhati, and Shillong; VI at Dhaka, Calcutta, Dhubri, Darjeeling, and Imphal."

As soon as the earthquake hit Assam, large landslides blocked the Subansiri river (it is one of the tributaries of the Brahmaputra); immediately mud, silt and all kinds of debris formed into a slip-dam at Siplu-Subansiri confluence. On the night of 19th August, the dam burst and flooded several villages, killed 532 people. Other tributaries of the Brahmaputra—the Dibang, Dihang and Tiding—were also badly affected. Several villages in Mishmi and Abor Hills (Arunachal Pradesh) were destroyed and hundreds of people died.

The Brahmaputra river was greatly affected by the earthquake. A roaring wave of water about 4 feet high was observed during the initial shock, writes M. C. Poddar, scientist, Geological Survey of India. Several boats washed up on the shores; some were badly damaged. At many places, channels of the Brahmaputra have been silted up due to the squeezing out and fissuring of the soft banks. After the earthquake, an enormous volume of sediment brought down into the river beds, thus filling up the floor to a great extent. The river water became very muddy and thick.

Mrs Renu Majumdar, 85, who lives in Guwahati, shares her memories of the earthquake with The Sentinel Assam: The mighty Brahmaputra was next to our residence, we saw big ships, boats, fishes were washed to the shore. Large numbers of dead animals, river dolphins and turtles could be seen floating in the river.

Obviously, the five districts of Assam—Sadiya, Dum Duma, North Lakhimpur, Dibrugarh and Sibsagar—were severely affected due to their location near the epicentre. The intensity of the earthquake was recorded X at these places. Colin S Jackson—who had just arrived on a Tea State in Darang from UK—recalled the earthquake: When the earthquake struck, the bungalow was rocking so badly that it was not possible to stand......As the wall tilted away so we made further rushes until we got down the bungalow steps into the compound. It was not possible to stand, and crouching / squatting on the grass we saw the plinth bungalow, all lit up, rocking rather like a boat as it rocks in the wash as a speed boat drives past creating waves which the ground was making. He also wrote about two of his friends who were in North Lakhimpur when the earthquake struck: On Seajulie T.E. in North Lakhimpore, Bill and Marjorie Christie had a terrifying time where the ground opened and the ground rose on one side while it fell away on the other. Bill and Marjorie stood one on each side of the crack passing their baby daughter to the one who was rising, and back as the one sank and the other rose. Ultimately with the quake over they were all three safe.

Needless to say, roads, bridges and railway lines were badly damaged in and around Sadiya, Dibrugarh and North Lakhimpur; also, a large number of buildings collapsed. According to Poddar, The affected buildings have suffered mostly on account of age-old construction, poor quality of the sand-and-lime mortars. One or two cases of damage to concrete buildings were recorded at North Lakhimpur due to subsidence. Cases of subsidence and crumbling were reported from Balibat area in Jorhat.

The number of casualties, according to official report, was 1526 — 952 from Mishmi and Abor hills and 1074 from Assam. However, according to Time, the death toll was close to 5,000. Nearly 100,000 homes were destroyed by the earthquake, reported The New York Times. The loss of property was estimated to be worth $25 million or more U.S. at the time of the earthquake, says NOAA.

The earthquake lasted for 4 to 8 minutes. However, some people exaggerated that it was lasted for 10 minutes or longer. Aftershocks occurred throughout the night, and people had to spend the night outside their houses. Some of the aftershocks have been fairly strong, wrote Poddar, particularly those of 16th to 18th August, 13th and 30th September and 4th October 1950.

Immediately after the earthquake, Sadiya was completely cut off from the mainland Assam. During this critical time, however, the first government agency who came forward to start rescue operation was Assam Rifles. Actually, there were two Assam Rifles outpost in Sadiya Frontier Tract—one in Riga and another in Walong. Both the outposts were badly damaged by the earthquake. Most of the barracks and family quarters had either collapsed or became unsafe due to severe damages, says the History of Assam Rifles. After the initial shock was over the Assam Rifles recovered quickly and the best in every man came to surface. At Sadiya they put shelters for their homeless families within 24 hours of the earthquake. Similarly all posts started repairs to their buildings and also work on tracks in a desperate bid to link up with the Battalion Headquarters and with each other. The result was that within a short time, though after very heavy toil, the Assam Rifles were able to open all the important tracks in the Mishimi and Abor Hills.

After a few days, Indian Airforce launched relief operations in the affected areas. Dakota aircrafts started dropping foods in the areas which were cut off. In his speech to the Nation (broadcasted over All India Radio on 9th September 1950), the Prime Minister of India Mr Jawaharlal Nehru said, "Everyday our aircraft fly often through bad weather, taking rice and other foodstuff, and drop them for starving people. We have now sent some smaller planes also for reconnaissance work as well as to land some of our officers in these marooned areas, if that is possible. In addition to our own aircraft, two small planes belonging to the tea companies have also done excellent work in carrying and dropping food in these areas."

At the same time, locals and outsiders were also engaged themselves in relief and reconstruction, which was widely praised by everyone. Volunteer relief societies, local as well as from outside, are doing good work, said Nehru. I should specially like to mention the fine work being done by the staff and students of the Medical College at Dibrugarh.

Mr Kingdon-Ward, his family and the porters were safe though they did not able to come back to Sadiya immediately after the earthquake. Landslides blocked all the roads in the hills and the Luhit river was in full flood. Besides, the rope bridge across the Luhit river—which was connected Rima with the only trail to Sadiya—had been swept downstream after breaking. However, after few days, they—along with some other locals—headed towards the Luhit and built a sliding rope on a plaited bamboo across the river. Kingdon-Ward mentioned that two Assam Rifles men were also in their team. After crossing the river, they had to walk across the rugged hilly terrain and through the jungle for over two months. Then, on November 4, wrote Kingdon-Ward, after a sticky descent of 3,000 feet, we reached the plains.