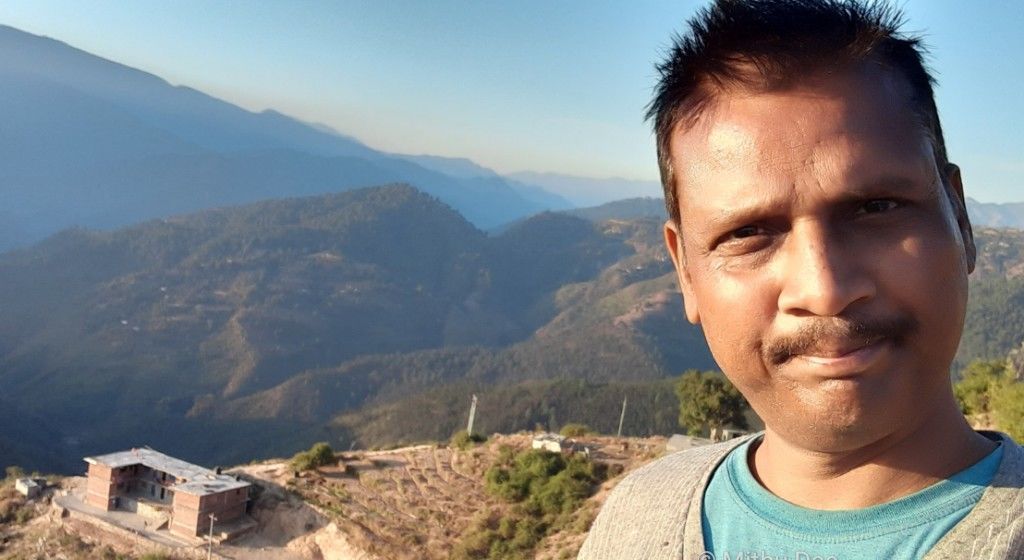 The author of this blog, Mithu Das, is standing on a hillock at Zero Point, Silgadhi. Behind him, on the left, is Shree Bhagrati Academy.

The alarm clock went off at 6:00 AM and I got up. It was mid-December and I felt very cold. The temperature outside was hovering around 2°C. I poured some water into the electric kettle and switched it on. After a few minutes, the water boiled which I poured into a bucket; mixing a lot of cold water with it, I carried the bucket into the bathroom.

After finishing the bathroom ritual, I came back to my room and poured some water into the kettle again—this time for making tea. It was still dark outside. (Here, in Silgadhi, the sun doesn't rise until 7:00 AM in winter.) However, I had finished my breakfast before the sun rised. By 7:30, I was ready to go to school, but as soon as I stepped out onto the veranda, a sweet voice touched my ears.

"Good morning, sir!" It was Sakshi, who was standing on the first floor balcony. Beside her was standing her brother, Saksham. Both were smiling. It was a beautiful morning. The sun had just started its journey over the hills. The sunshine—which I felt pleasantly warm—had soaked up everything—the houses, the trees, the road, the hills, and the sky.

"Are you playing Musical Chairs today?" I asked.

Sakshi, 8, read in class 2, and Saksham, 10, read in class 4 at Shree Bhagrati Academy where I taught English. Every Friday our school would organise sport events—and like most of the children—Sakshi and Saksham would take part in it. Musical chairs was their favourite game.

I bade them adieu and headed towards the alley. Then climbing half-a-dozen stairs and a steep hillock, I reached the main road. From there my school was three minutes' walk.

The road that passes through the hilly terrain above our house is Silgadhi-Sanfebagar Highway or H15. It connects Dipayal (Pipalla Bazar) with Silgadhi. Silgadhi is a beautiful hill station situated at an altitude of 1,310 m (4,300ft). It has a Municipal office, a police station, an army training centre, two banks, four hotels and a few government and private schools. The main market—which is smaller than Pipalla—has been slowly evolving around Shaileshwori temple.

Shaileshwori is one of the famous temples in Nepal. Legend has it, while Parvati was dancing with Shiva at this place, gods and goddesses were secretly watching them. Feeling deeply embarrassed, Parvati turned herself into a rock. Since then Shaileshwori has known as Shiladevi or Stone Goddess. Every year, during Kartik Purnima, a big mela is organised here.

After visiting Shaileshwori, one can hike to Khaptad National Park or roam around the forested hills and rice terraces in Silgadhi. A great many birds can be seen in these places. If you are lucky, you can see one or two bears in the forests. The view of 'Pipalla with Seti river' from Zero Point is another attraction.

I inquired about tourist visitors. Mr Hemraj Malashi, the principal of our school, told me that a small number of tourists frequently visit the place. Some come to bike around Silgadhi while others stop by Shaileshwori on their way to Khaptad.

"Agriculture is the main source of livelihood in Silgadhi. Major crops are paddy, wheat, maize, mustard, winter and summer vegetables." However, many people from here also go to India for employment.

Though the name of the two places sounds one (Dipayal Silgadhi), both are situated in different locations. Dipayal is situated on the plains between the hills, Silgadhi above it. The Seti river divides Dipayal into two parts—Pipalla Bazar which is situated on the north bank, and Doti Airport on the south. Both the places are district headquarter of Doti District and belongs to Sudurpaschhim province.

Dipayal is a beautiful place surrounded by forested hills. The Seti river flows through it, which increases the beauty of the place manifold. Pipalla is a commercial hub around the locality. The one-runway airport serves for domestic flights. However, flights are not operated daily from here. The airport is often used by helicopters to ferry tourists to Khaptad.

Bashant Panchami was observed on 16 February 2021. We built a Puja Mandap and worshiped Godess Saraswati in it. Nearby the Mandap was built a stage where cultural programmes were organised. Students who took part in it came dressed in traditional Nepali costumes. They performed Deuda Naach and other popular folk dances. Some students sang modern Nepali songs; some sang Hindi. Sakshi and her friends performed a wonderful dance with Nepali song Takan Tukun; Saksham performed a rock dance. Arunima Bhandari was the anchorwoman, Ghanshyam the anchorman. It was a wonderful programme.

The House of Mr Ganesh Malashi

I called it Saksham's house. If anybody asked me where I was residing, I quickly answered "Saksham's house". They understood that I wanted to mean "It's Sakshi and Saksham's father's house" or Mr Ganesh Malashi's house. Everybody knows Mr and Mrs Malashi here. Both are kind, gentle and good parents.

I lived in a small room in their house—on the ground floor. The room was viewed and choiced by Mr Hemraj Malashi. It was a comfortable room and the window was facing to the east. Many a morning I enjoyed watching the sunrise sitting in front of it.

The day I arrived here, Mr Malashi asked me to give their children tuition at home, which I gladly did. Every day, after school, the children came to my room. I helped them with their homework, taught them English, did maths and science projects. Both are brilliant students. One day I asked them about their aim of life—Saksham replied he wants to be a pilot, Sakshi a teacher. Soon another student joined us—Samrat—who is also a good student.

It was Surender, a student from class 6, who told me about Chhipla forest which is situated a kilometer away from their village. The forest is full of birds and Indian gooseberry (amla) trees. I wanted to visit the forest and asked him if he could take me there. He said he could.

One Saturday morning we—Surender, Aayush and I—set out on a journey to Chhipla. We walked a mile through rice paddy terraces and climbed a steep hill to reach the forest. Once we were there, Surender carefully started looking at the trees on the hillside, but he couldn't find any amla tree. Then we climbed a few meters more. Suddenly, he pointed out a tree to Aayush, "Herr, amla rukha!" (Look, amla tree!), and both the boys run towards it. Within a blink of an eye, Surender climbed the tree and started shaking the limbs. Aayush picked up the amlas from the ground and put them into a bag.

The place where we were standing was surrounded by many species of trees. From there, I could see the Seti river flowing between the hills and the villages. It was a breathtaking view. After sometime, we started walking again—not towards home but towards the Seti river. Then descending two steep hills—which was not easy for me—and walking a mile or so, we finally reached the bank of the Seti river. From there we directly walked to Dipayal and catched a bus to Silgadhi. Needless to say, by the time we reached home, the dusk had fallen. (By road, the distance between Dipayal and Silgadhi is 10 km.)

The last image taken in Nepal

If you are in India and want to go to Dipayal Silgadhi by bus, then you can enter Nepal either from Gauriphanta or Gadda Chauki (Banbasa) border. To reach Gauriphanta you need to take a bus from Palia Kalan. You can get a direct bus to Banbasa or Palia Kalan from Braeilly.