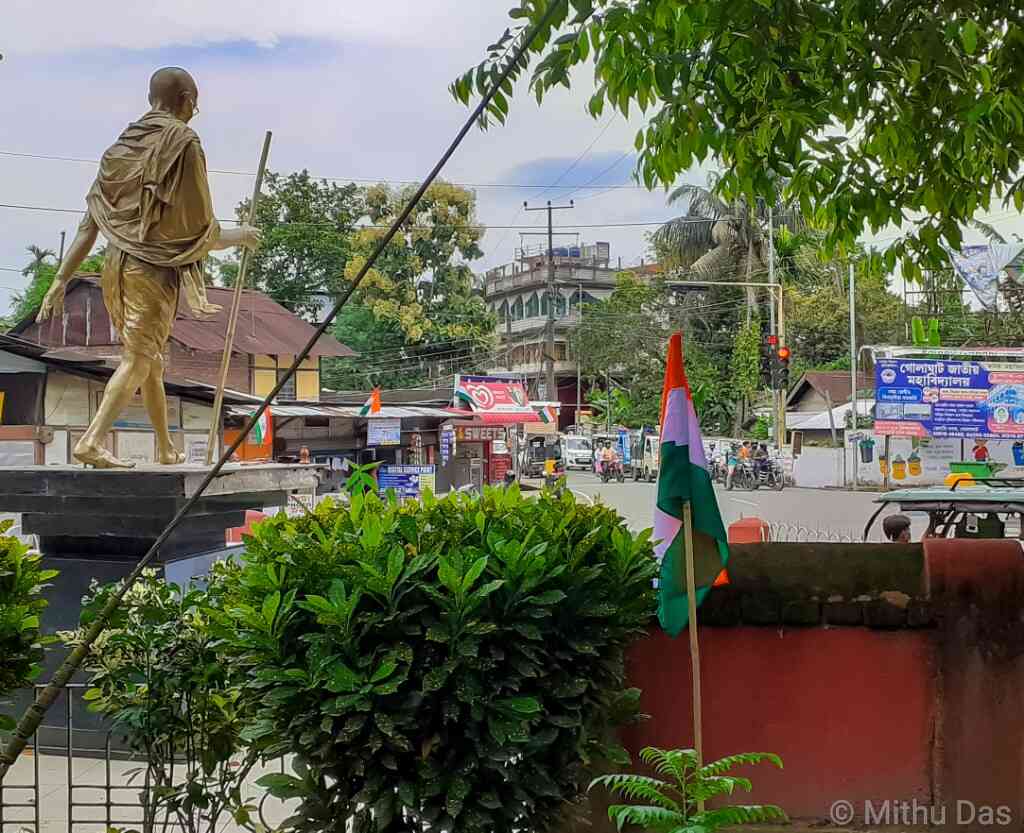 The Statue of Mahatma Gandhi, Golaghat.

India's freedom movement is said to be started by Mangal Pandey in 1857. Pandey was an infantryman in the 34th Bengal Native Infantry regiment of the British East India Company. In March 1857, when Pandey and their colleagues heard that the lubricant used in greased cartridges was either cow or pig lard, they became very angry with their officers. Immediately Pandey vowed to kill one of the officers, and as per the plan of attack, in 29 March, he killed Lieutenant Baugh with his sword. After this incident—which had inevitably started Sepoy Mutiny of 1857—the British Government possessed all assets of East India Company and imposed direct rule over India.

Pandey was executed on 8 April 1857. However, the courage he had shown left a mark of respect for him in the hearts of millions of people.

In 1885, the Indian National Congress was found by Allan Octavian Hume and their friends. The aim of the party was "to create a platform for civic and political dialogue between them and the British Raj." Later, leaders like Mahatma Gandhi, Jawarhal Nehru, Subhas Chandra Bose, and Sardar Vallabhai Patel served as president of the party. Under the aegis of their leadership the party played a central role in organising the mass movements against the British.

Mahatma Gandhi advocated for a peaceful and nonviolent end to British rule. The independence movements led by Gandhi are Champaran Satyagraha, Kheda Satyagraha, Khilafat Movement, Non-Cooperation Movement, Civil-Disobedience Movement, and Quit India Movement. On the other hand, Subhash Chandra Bose, who—unlike Mahatma Gandhi—was a revolutionary. After resigning from the Congress party, in 1939, he led the Indian National Army to fight against the British.

From the beginning people who took part in the freedom movement had to face strong resistance from the British. It was estimated that as many as 200 or more freedom fighters were executed by the British. Maniram Dewan, Piyali Barua, Khudiram Bose, Kartar Singh Sarabha, Hemu Kalani, Bhagat Singh, Shivaram Rajguru, Basanta Biswas, Kanailal Dutta, Pritilata Waddedar, Chandra Shekhar Azad, Jatindra Nath Das, Ashfaqulla Khan, Kanaklata Barua are a few among them.

Here we should also mention the name of Kushal Konwar from Sarupathar (Golaghat). Konwar was executed on 25 June 1943. However, he wasn't involved in derailing the British military train near Sarupathar in 10 October 1942. It was C. M. Humphrey, the Magistrate, who presumed that Konwar was guilty for the incident.

This year India celebrated the first anniversary of the completion of 75 years of the independence. Golaghat, like other parts in India, shown their respect towards the freedom fighters; the people flew the National flag on their houses, business places, motorcycles and vehicles for a week before the I-Day.