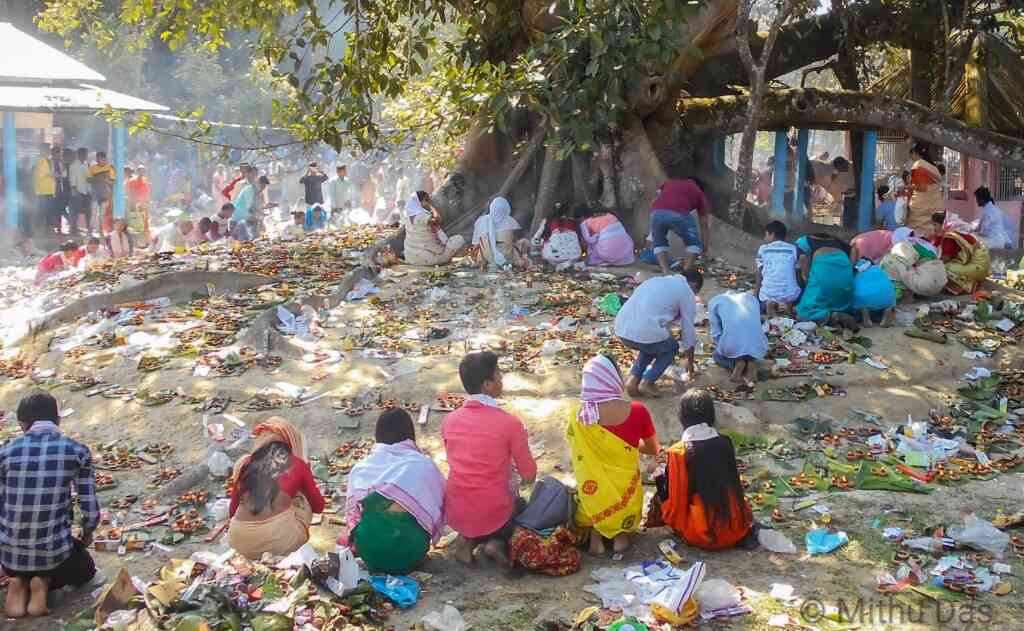 People lighting earthen lamps and inscense under the banyan tree at Bortol.

Every year, people come in their hordes to attend the mela at Bortol. They offer ducks and ash gourds to the temple and ask god to fulfill their wishes. The unique prasad is another attraction to them.

Bortol, which is a place of worship for Hindus, has been attracting me for a long time. I heard many stories about it, some of which I found to be quite interesting. Though it is not far from my hometown Golaghat, I couldn't arrange a visit to it, especially when melas were organized there.

Last Saturday, that was 5th November (I started writing this blog on 9th), when I was buying groceries at a shop, I heard two people were talking about Bortol.

"We're going to the mela at Bortol tomorrow," one man said to another. "Are you going?"

"Oh yes," the another man replied, enthusiastically. "We have been planning for a month to attend the mela."

I enthralled listening to their conversation; and immediately I decided to go to the mela. The following morning, I went to our office, picked the scooty up from the garage, jumped on it, and twisted the eccelerator. Within a few minutes I found myself in the outskirts of town.

The road from Golaghat to Bortol runs through beautiful countryside. One can see green fields of rice crops or small tea gardens along both sides of the road. Nearby the fields lie villages which are surrounded by tropical evergreen trees. On the way, you can stop by (Birangana Sadhoni) Kalakshetra or Jugibil Lake for a cup of tea or selfie.

As I was approaching Akamoluwa Gaon, the village where Bortol is situated, I saw e-rikshaws full of people were heading towards it; also, a motorcycle or a car was driving past me occasionally. A few minutes later, I reached the main gate to Bortol, and I found myself amid congestion. Cars and e-rikshaws were parked on both sides of the road, which made difficult for people to walk through it, let alone to ride a motorcycle. So, I parked my scooty at a parking place and started walking towards the temple.

The road was pretty crowded. People were walking from both directions: those who attended prayers were returning from the temple while we were heading towards it. Along both sides on the road locals put up temporary hotels and stalls on which you could buy earthen lamps, inscense, mustard oil, matchboxes, and water bottles.

As I was nearing Bortol, the crowd was thickening, and I had to push my way to the entrance of the temple. Then, leaving the main road, I stepped onto a grassy patch and found myself standing in front of a banyan tree. It was a big tree whose top branches spreading over the temple compound and lower branches touching the ground. Under the tree lies a tin-roofed temple which was overcrowded. I saw people were busy lighting earthen lamps and inscense under the tree. Smoke was slowly rising from burning inscenses, filling the whole place.

On the other side of the temple, people were standing in queue in front of a makeshift shelter. They were holding in their hands a pati duck and an ash gourd. Two volunteers, who were standing at the entrance of the shelter, were accepting the ducks and gourds from them and putting the things into the shelter one by one. I came near the shelter and peeked inside it, and I couldn't believe my eyes. Hundreds of pati ducks were kept there: all alive, quacking, flaping their wings, eating something from the ground. Near the makeshift was kept a big pile of ash gourds.

"How many ducks are here?" I asked one volunteer, who was a young man, wearing white shirt and dhoti and a gamosa around his neck.

"I can't say accurately," he told me, smiling. "May be two thousand or more."

I looked at the ducks and took some pictures; then I turned my camera towards the huge pile of gourds. I didn't ask the young man how many gourds there could be; but I was sure that the numbers of gourds would far exceed the numbers of ducks.

Nearby the makeshift there was a kitchen in which temple volunteers were cooking rice and duck meat with gourds. It's a tradition in Bortol that the temple should distribute rice with duck curry as prasad to its devotees.

It is believed that anyone who offers a pati duck or an ash gourd to the temple, their wishes will be fulfilled. This is why people come in their hordes to join the mela which is organised on a Sunday between mid-October and mid-November every year. However, not everyone who comes here offers duck or gourd to the temple; some come to roam the mela while others come to eat the prasad; but the majority of people come to kneel in prayer under the banyan tree.

I wanted to know the history of Bortol. So, I contacted Mr Diganta Saikia, the secretary of the temple, who gave me some information about the place.

The history of Bortol goes back to one hundred and fifty years, or maybe two hundred years, said Mr Saikia. The place where the banyan tree stands today was once a big field covered with grass patches, and cowherds grazed cattle on this land. Every now and then the cowherds made picnic near the tree. Then, one day, somebody in the village had a dream: the god Dangoria Baba was talking to him: "Offer me a pati duck or an ash gourd and I will fulfill your wishes." The next day, the news spread like wild fire through the village, and people rushed to the banyan tree and performed a puja under it. As time went by, more and more people started visiting the place. However, after social media exploded in popularity, Bortol has received the most attention on it.

There are several ways to Bortol. If you make your way Bortol by NH-37, take PHG Path via Dergaon, or Dhodar Ali via Komargaon; if you come by NH-39, take Golaghat Dimapur Road. From Golaghat town, one can take Mission-Club Road and go along the road through Tenpur to Bortol.